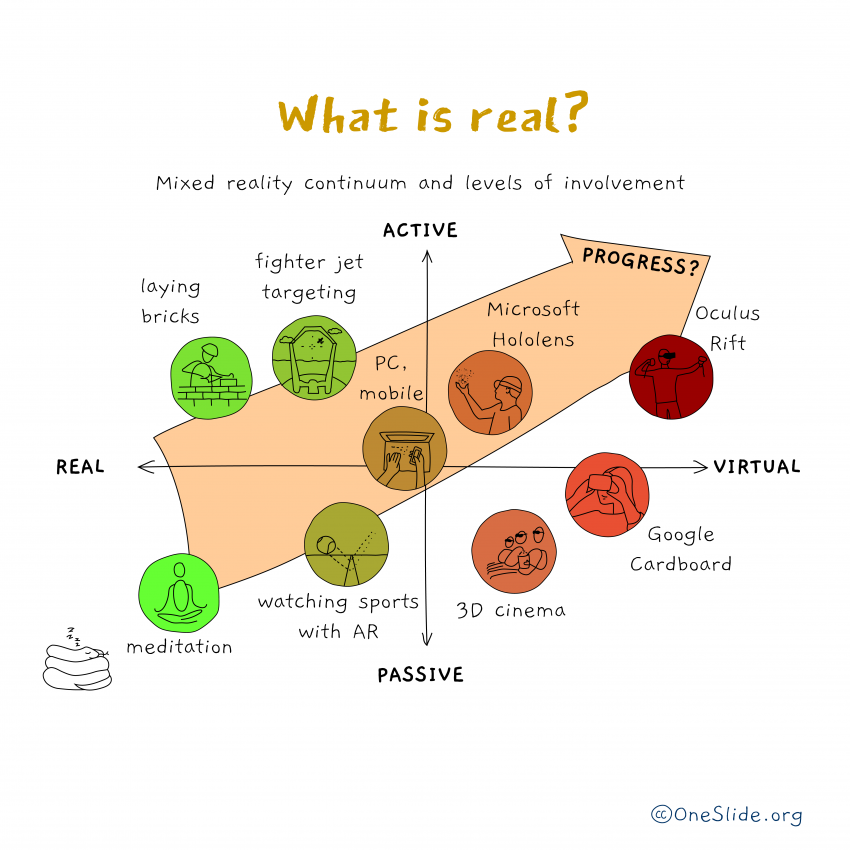 With the advance of virtual reality, this question is going to be more and more complicated, while simultaneously more important for the general public.

In this light, it’s interesting to look at the famous paper about mixed reality dating back to 1994. In it, Paul Milgram and Fumio Kishino explored the idea that the border between what is real and what is not is rather blurry. Take a look at the figure from the original paper:

Since its humble beginnings in the 1960s, HMD (head-mounted display) technology has come a long way. With Microsoft HoloLens already shipping to developers, the future of mixed reality is coming together rather quickly. Take a look at the promotional video for the HoloLens project:

Quite impressive, isn’t it?

But the real future of mixed reality may not be so bright. Check out a dystopian vision, put together by Keiichi Matsuda:

Now one of the key reasons why MR (Mixed Reality) can be more powerful than full-on VR (Virtual Reality) is that users don’t feel that they are “escaping” from the real world (which is still a controversial idea for many). They rather feel that they are adding to their world, they are making it more rich. The debate about escapism in relation to VR is not new. In his 1974 book “Anarchy, State, and Utopia”, Robert Nozick published a thought experiment: he imagined a machine that could make you experience anything (pleasurable) in a realistic way and asked if given the choice, we would prefer the machine to real life. He believed the answer for most people to be a firm “No”. But today a lot of us are actually saying yes in a very real way, despite the fact that for most the “experience machine” is still just a small flat screen and a pair of headphones. Imagine what will happen when MagicLeap finally makes its technology available to the world, effectively enabling “virtual” to seamlessly blend in with the “real”!

Don’t get us wrong, we don’t think we need to (or can) stop the progress on this front. But what’s interesting is how we will move forward. If you take a look closely at the path MR/VR development has taken over the years an obvious trend appears: the experiences are becoming more immersive, more active (requiring active participation from the user) and generally less “real”. One can say that the reason for this is simple: as more processing power becomes available, experiences are getting “better”. But there is also a different way to look at it.

Ever since the dawn of consciousness, humans have been struggling with the tension between the “real” world in which they are present and the “virtual” world of thoughts and ideas, predictions and what-ifs that occupies their minds. With limited brainpower, attention has to be divided between “what’s going on” and “what could happen”. And paying increasingly more attention to “what could happen” has proven to be a good strategy from the standpoint of natural selection (at least in the short run). Then we started modifying our environment in ways that would make it more predictable, so that we could pay even less attention to what’s going on and focus more to making better predictions. And somewhere along the way, we started losing our ability to experience happiness. Because true happiness is mostly associated with being fully, “unselfconsciouly” present in the here and now. Some people say that MR/VR can actually help you feel more present. We hope this is true, but we yet to experience it (”novelty” effect aside). What we see now in the VR and especially MR space is taking a route which is opposite to presence: they don’t get you back to your senses, but rather obscure them further by overlaying more data on top of them. They get you to actively shape your reality so that you don’t have to spend time feeling it. How sensory deprivation can lead to increased sensitivity is clear, but we don’t (yet?) understand how increased sensory overload can lead to being more “here”. We are hopeful though that VR (not so sure about MR) can really find its way, so that it makes us more present and happy, rather than lost and miserable.

Here is the most promising example we’ve seen so far. From UsTwo Games:

We believe the leap to MR/VR is happening. But we wonder if we (as a species) can be a bit more mindful than usual when taking arguably the single biggest step in modifying our environment. Because after we change our environment, our environment is going to change us. So if we look one step ahead, the question really is:

Which way do we want to change?