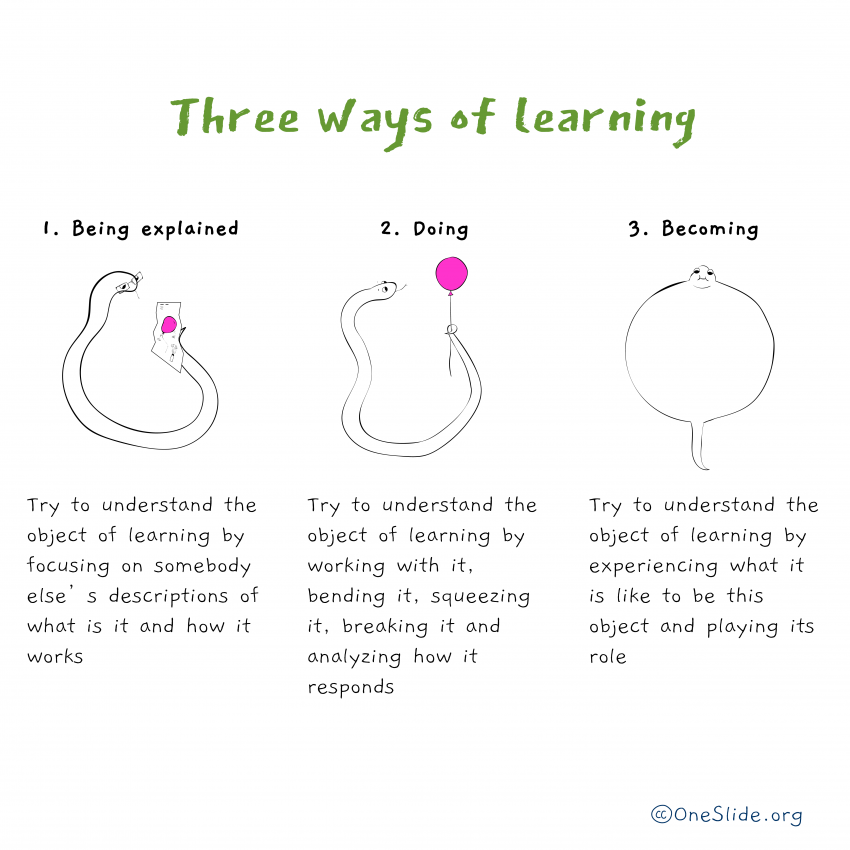 It seems to me that there are 3 fundamental ways of learning and classical education systems are disproportionately focused on two of them, ignoring the third, which is, in many ways, much more effective and can lead to deeper understanding.

1. Learning by being explained

This is the kind of detached, abstract learning that dominates most of the classrooms today. The premise of this approach is that desired output of the learning process is that a particular model of the object being learnt is copied from the mind of the instructor (in the form of a person, a textbook or a computer program) to the mind of the student

A clear benefit of this approach is that the more people have a shared understanding (i.e. model) of the object – the more they all will be able to communicate, draw same conclusions and operate predictably.

There are many drawbacks to this approach though. Two most significant ones are:

This is a kind of hands-on, applied learning that young children practice naturally and that increasingly gets traction in many classrooms and work environments. The basic premise here is that the desired output of the learning process is acquiring experience with the object of learning and through that experience developing some understanding of how it works. This understanding can then manifest in the form of an abstract model

The benefits here are that you as a student get to experience the object, play with it, feel it, stretch and squeeze it, break it and rebuild it. You get to engage your sensory and motor skills and develop your own understanding of what this object is and how it works. Abstract models, built on the basis of experience are now seen for what they are: models, not the objects themselves.

The drawbacks are that it takes much longer and the resulting understanding can vary significantly from student to student, depending on their individual experiences with the object. That makes it harder for us to predict how students will operate in the future.

Finally there a third way, which is almost ignored in most of the formal learning environments today. The idea of “Learning by Becoming” is simple: if you want to learn how something works – become it. It may sound strange, impossible or counter-intuitive to start with, but makes a lot of sense if you think about it. After all, from evolutionary standpoint, our learning ability has not evolved for us to be able to grasp theoretical concepts or even for us to be able to use tools. It has evolved for us to be able to adapt to different environments and situations quickly, which means that we are ought to be much more able to grasp our own environment, its limitations, the degrees of freedom and possible behaviors than the inner workings of something or somebody else.

Here are three examples of how the idea of “Learning by Becoming” has been used in the past:

Seymour Papert – Play the Turtle
When in the late 1960s mathematician Seymour Papert was trying to teach children (both ordinary children and the ones with special needs) how to think better (mostly applying his thinking to math education), he invented Logo, the first programming language, designed specifically to teach the fundamentals of “computer thinking”.
The basic logic of most of Logo programs is focused on controlling a real or imaginary robot (The Turtle), moving it around and making it do and draw things.
Of many things that Papert discovered in his work, one of the most profound was that abstract concepts that were hard for kids to grasp, became obvious if only they “Played the Turtle”, i.e. put the pen and paper (or keyboard) aside and “Became Turtle” for a few minutes: doing what needs to be programmed into the robot themselves and analyzing what the sequence of their actions they were taking.

You can read more about Papert’s work and experiences in his seminal book, Mindstorms.

Temple Grandin – Thinking like a Cow
When in the 1970s the livestock industry was struggling with the question of how to improve the efficiency and quality of the process of slaughtering cows, they were having a hard time, because the designs took into account the anatomy of cows, but not what it’s like to be a cow.
Then Temple Grandin came in and using personal experiences related to her severe Autism, managed to “become a cow”, start thinking like a cow and through that radically improve the efficiency of the industry and the wellbeing of the animals at the same time. While everybody else was looking at blueprints, she jumped into the corridor that cows have to go through before they are slaughtered and found out that the sounds and lights there were
scary – so they made cows afraid and unwilling to move forward.
Based on her experiences of “thinking like a cow” she proposed design changes that made a big difference in the industry and in the animal welfare.

To learn more – dive into the BBC Documentary about Temple Grandin and read her book.

Jaron Lanier – Be a Molecule
When in the 1980s Jaron Lanier was beginning to explore immersive virtual reality (VR) and its possible applications, he accidentally stumbled upon an interesting phenomenon: even if the avatar that a person is transformed into in the context of VR is deformed (e.g. has a hand the size of a building), people are still capable of learning how to operate it in almost no time. What’s even more interesting is that the same holds true even if
the avatar is structurally different from the “player”, for example has extra limbs. Back then the movement of extra limbs if your avatar is lobster was controlled by extrapolated data from parts of the player’s real limbs. Now it’s possible to control it directly by the brain.
Collaborating with progressive educators, Jaron then utilized this idea to teach people in a different way: students that wanted to know more about the structure of certain molecules, for example, were “transformed” into those molecules, so that they could experience the degrees of freedom and the environment better. They could all of a sudden feel what it’s like to be a molecule. It became “self-evident” why molecules can connect in a certain way, but not in a any other way.

You can learn more about Jaron’s work from his inspiring talk at the Learning Without Frontier’s conference.

In all three examples above, what we see is that empathy and whole-body immersion into the object of learning allows people to develop long-lasting intuitions about the object itself, from its own standpoint. These intuitions can then lead into more formal understanding of the object’s behavior and the models that can describe it best in different circumstances. It’s not too far-reaching to assume that immersion, especially multi-user social immersion into the object of learning can lead to real scientific discoveries. Think of the protein connections and DNA transcription, for example. How deeply would biology students manage to understand it if they had a collective, immersive VR experience of trying to do that themselves, each student “role-playing” a different enzyme involved?

First-hand knowledge, developed through becoming the object of learning – will probably be way more sticky than a purely conceptual one. Think of how once you’ve learnt how to ride a bicycle, you will never forget it. One can speculate that this is partly because when learning how to ride a bike, you and your bike become one thing and this one thing needs to balance as a whole.

Still the potential is huge, especially as Virtual Reality technologies are marching ahead and our ability to simulate the world is getting better.
After all, even simulations based on very crude models can lead to new profound understandings about how the more complex real world system behave.
Think, for example, of Lorenz’s discovery of of the foundations of the Chaos Theory that happened when he was working through an astonishingly crude simulation of the world’s weather, using not more than a dozen of simplistic equations.

The bottom line is that there is a massive opportunity for education: we can help students make the leap from just conceptual understanding to deeper holistic understanding and help them develop real multi-sensory intuitions, by adopting the “Learning by Becoming” approach and adding it to the mix of the different ways in which we foster learning.

If you want to truly learn something – you have to become it first.