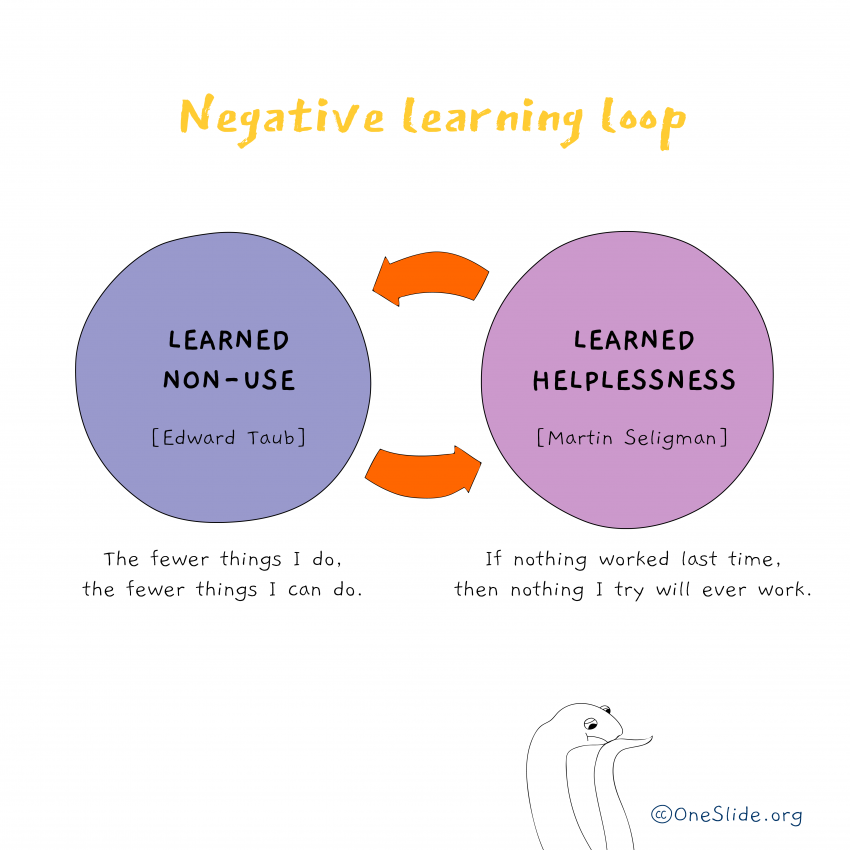 Learning (which is really just another word for adaptation) is a fundamental ability of all living things. Unfortunately, this ability can do as much damage to us as it can do good. Let’s explore two not-so-helpful things that people (and other animals) often learn: Learned Non-use and Learned Helplessness. Each can be damaging on its own, but when combined – they can form a truly awful self-reinforcing loop – the Negative Learning Loop, which may be one of the reasons why so many people never reach their true potential.

Take a patient who is recovering from a stroke that paralyzed his left arm. All the muscles and joints in his left arm are fine and operational, but all key control paths that were previously used to operate his left arm – are gone.  Technically, the arm is still wired up to the brain: the neural connection is still there at least partially. Signals from the brain can still reach the arm, but not through the “usual” path.

Here is an oversimplified metaphor that can help understand this condition and recovery options better: Imagine you live in a small village (the brain). There are two grocery stores in the area (two arms), both approximately 2 kilometers away via two different roads. Product range and prices are slightly different, but there is a lot of overlap in their offering (there are many things that you can do with either your left or your right arm).
One day an earthquake (the stroke) destroys the path to Store A. Naturally people stop going to it and switch to Store B.

Now there are two interesting scenarios:

In the brain, the same thing can happen. It’s called “neuroplasticity”. Through a series of pioneering experiments in the 1970s, Edward Taub showed that if an old “neural highway” in the brain is closed or cut because of a stroke, then a new path can be established and over time (if practiced) it can get almost as wide, mainstream, efficient and “usual” as the original one. This takes us to arguably the most important discovery that Taub and his colleagues made and proved in clinical studies: People are very good at learning not to use something. A big portion of stroke patients still have their paralyzed limbs wired to their brain. The connection is there a few months later, but by then they have learned not to use this limb and found a way to get by without using it. Put a cast on the other limb though (restrict the usage of an easier option) – and people are forced to exercise their paralyzed or weak limb. Little by little they learn how to use it again. The neural path gets wider and eventually turns into the highway, but only if it’s used. This had been proven for people and monkeys alike.

The concept of Learned Non-use is not only relevant in the disastrous context of a stroke: we all have our little thumbs wired to our brains, but over the years of using shoes we have learned not to use them much. Average adult, as a result, has almost no conscious control over the movement of their individual little thumbs. The concept can also be extended to more abstract areas and skills: all expat professionals know how easy it is to learn not to use your mother-tongue in certain situations and how hard it is to use it in those situations again if you have to. The bottom line is clear:

“If nothing worked last time, then nothing I ever try will ever work”

The second “bad” thing that we can all easily learn is to be helpless. Take a group of volunteers, put each of them in a room, show them a sequence of numbers and ask them to predict the next number to be shown (assuming there is some logic to the sequence). Half of the volunteers (Group A) are presented with real patterns of various complexity. Over time most of them will figure it out and can predict the next number accurately. The other half (Group B) is presented with a completely random set of numbers. They try and try – but the task can’t be solved, and so over time, they give up. Half an hour later take the same two groups and now show all of them a new sequence that is solvable. People from Group B (that was defeated by randomness the previous time) are significantly less likely to grasp the pattern and significantly more likely to give up early. Why? Because they learned to be helpless: no matter how hard they tried it didn’t work the previous time… So it’s unlikely to work this time either.

What are the key things that can induce Learned Helplessness?

Learned Helplessness, discovered by Martin Seligman and Steve Maier in the late 1960s, is supposed to be a big component of many types of clinical depression. And it is not specific to us humans. In fact, it was first shown in dogs and later observed in various species, from rats all the way down to insects. One peculiar detail about humans though is that, unlike any other species, we can acquire Learned Helplessness by merely watching somebody else experiencing the uncontrollable stressors. This is remarkable and will have a lot of implications for the design of peer-driven systems, such as workplaces and schools: not only positive learning can be effectively acquired from peers (as shown by Sugata Mitra and others), but negative one as well.

The bottom line is clear. We are very much “wired” to get into the following line of thinking:

“If nothing worked last time, then nothing I ever try will ever work”

And this line of thinking can lead people to inability to learn new positive things, elevated levels of dangerous chemicals in the bloodstream and clinical depression. Pretty bad stuff.

If you think of how Learned Non-use can work together with Learned Helplessness, the picture gets darker: the two can readily form a dangerous self-reinforcing feedback loop:

This pattern can do damage in many areas, but let’s take a brief look at two areas that are of particular interest to me: A) children’s learning and B) Change Management in organisations.

As we have seen, Learned Helplessness, combined with Learned Non-Use can form a dangerous self-reinforcing loop that is very capable of stopping people and organisations form reaching their potential.

How can understanding the two phenomenons and their interconnection lead to better decisions in designing school grading systems, organisation charts, HR policies?