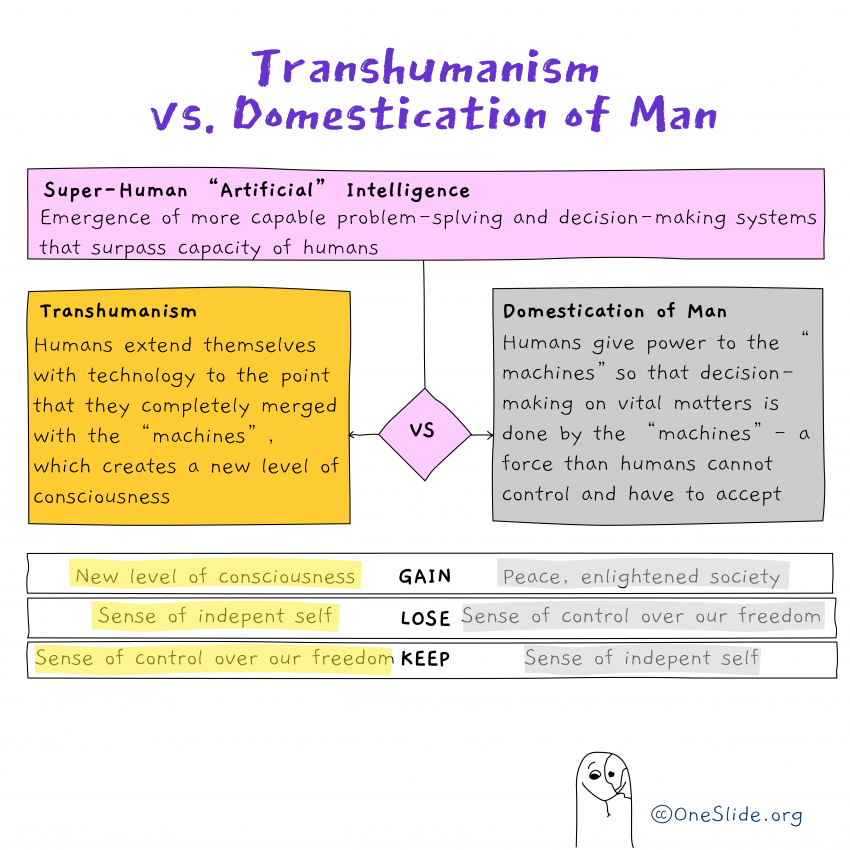 1. This is not a fully-formed thought yet. More like a thought-in-process. Yet already interesting enough to capture.

2. The presented dichotomy is (as essentially all dichotomies) false. The two opposites are neither mutually exclusive nor collectively exhaustive. They are, in a certain way – two inseparable aspects of a single process. Yet despite this, the distinction between Transhumanism and Domestication of Man seems to be productive for further thinking about the subject, and as such – should be considered useful enough to be presented.

Transhumanism vs. Domestication of Man

Like many others [hello, Elon Musk & Sam Altman], we believe that the emergence of superhuman artificial general intelligence is not only around the corner, but is already a reality. This emergence has not yet passed a tipping point (that some call singularity), and may never visibly pass it. But it’s been happening all around us in the past 60 years or so. First machines became better than most humans in arithmetic. Then better than even the best of humans in playing chess and a lot of other more useful fields.

Now they are better at driving cars and trading stocks… So it’s only a matter of time till they get better at all practical things (i.e. things related to physical well-being of humans and life on Earth in general).

We can see two directions in which humans can productively respond to this change:

First, we can accept that machines are better at decision making and so know better what’s good for us. The first big steps in this direction have already happened as we outsourced first our memory [hello, Ted Chiang] (all digital storage) and then our control over what to pay attention to (Google and FB prioritization algorithms). So as we gradually hand over control to the machines, we will for the first time in history, become fully domesticated as a species [hello, Steve Wozniak]. Since even in the most oppressive societies the ruling elite is not restricted and so can potentially run wild [hello, Aldous Huxley]. But this can’t happen if the ruling is done by machines. It’s important to notice that for this to be true and safe – no one should be able to override the machines and all should obey completely since even a tiny backdoor giving the very few the ability to control the controller – will undermine the whole thing.

Being voluntarily domesticated is not bad if you think about it: if you have a pet you may have envied the carefree life that the pet gets to live. In a positive scenario, humans, freed from material concerns and political struggles can fully devote themselves to arts and sciences – the golden age of culture will arrive. The question of “why would machines keep us around” is of course irrelevant, since in this scenario – keeping us around is their primary goal and concern. A harder set of questions arises about what they should optimize our lives for and how they should receive and process feedback that we will give back to them so that they can learn and alter their behavior. But we are not going to touch on those questions here – for now, we will keep focused on the higher picture.

Second, as an alternative we can say that “if they are superior – then need to become them”. This is a very elegant solution indeed: instead of working out a complicated relationship between “humans” and “machines”, we can simply dissolve the barrier between the two. In short – we can become machines. Similarly to the first path, the first steps in this directions have also already been taken: this text is written and most likely read on a machine – a machine that by being a media is very much responsible for the message (hello, Marshall McLuhan).

Now the transhumanist path is much more radical, because it inevitably leads to a radical redefinition of “I” and everything that this brings.

The chart above details more aspects of these two paths and highlights some of the foreseeable consequences of each of them (what we are likely to keep, gain and lose by following this path).

For the record, if right now we had to make a conscious choice between these two extremes for myself and my children – we would definitely go for the domestication. We trust machines more than politicians and see nothing wrong with being domesticated, relieved of all material concerns, and allowed to focus on the enjoyment of arts and sciences. Of course, our rulers will have to be carefully designed and will have to incorporate multiple human feedback systems to ensure the “benevolence” of our technological master. The problem of designing such a system does not seem to be beyond our own limited intelligence.