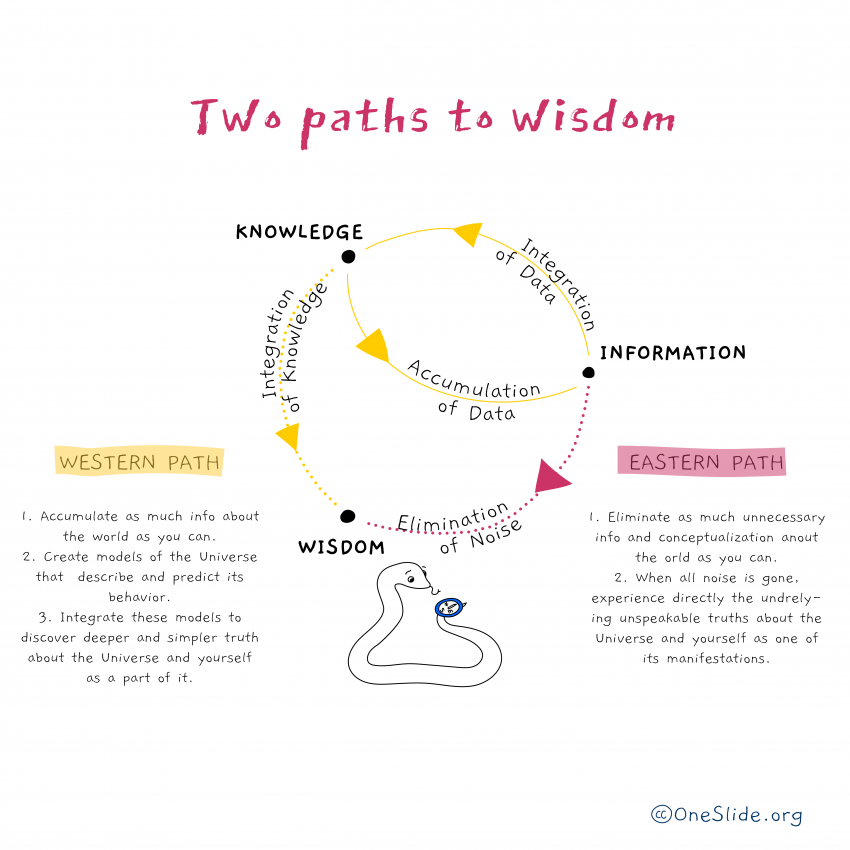 For the sake of this conversation let’s define “Wisdom” as an intuitive understanding of the deep yet simple underlying truths of life, the universe, and everything (we have no idea what those truths are, but we believe and sense that there are some).

Such an understanding enables the one who possesses it to live a fulfilling life, be in peace with herself and her surroundings, and positively contribute to the lives of those around her.

We believe that Wisdom, as we broadly defined it above, can be reached by following [at least] two different paths.

People usually start this journey from a place where we have some Information about the world (i.e. facts) and some Knowledge about it (i.e. working models). Once you get out of your mother’s womb, you start accumulating data about the world. By the time you learn how to speak, you have a comprehensive set of working models that help you conceptualize, predict and affect the behavior of the world. Language itself provides an extremely powerful and yet restricting working model of the world.

From there – there are two paths you can take to Wisdom:

Let’s mark the first path green and call it “Western”. The name is an awful over-generalization, but it seems to be broadly true that in “Western” civilization(s) this path has been considered the primary one and has contributed the most to the overall progress of thought. Following “Western” path means accumulating increasingly more information that enables you to create better models of the Universe. These models then allow you to mold the world and create tools that help you get even more information. This loop accounts for scientific progress. But in order to transcend from there to Wisdom – you have to make a leap and integrate all the Knowledge you have with the understanding of oneself. Finally, you may be able to distill the underlying principles of the Universe and yourself as a part of it. Generally speaking, “Western” civilization is struggling with [helping people] make this last leap. About 100 years ago with Quantum Mechanics and Relativity, with Freud and avant-garde art, we seemed to be standing at the brink, ready to jump. Yet 100 years later, despite the advances in everything from Cognitive Science and AI to Cosmology, we are largely still standing there, staring at the abyss.

Let’s mark the second path blue and call it “Eastern”. Again the name is an over-generalization, but it can be said that in the most prominent Eastern civilizations (Chinese, Indian), this path has traditionally been advanced and respected more than the other one. Following the “Eastern” path means directing your practice not to the increase of information and knowledge, but to the elimination of the excess of it. As you get rid of all the unnecessary information and conceptual frames (models), your mind finally finds itself empty enough to experience directly the underlying truths about the Universe and yourself as one of its manifestations. The primary problem of this second path lies in finding the best ways to eliminate the noise, get rid of the frames and empty the mind. Various traditions have evolved over the centuries – offering different ways in which this can be done (from Yoga to Zazen to Martial Arts). The development of these traditions seems to have slowed down in the past few centuries.

It seems to us that both paths are valid. None is better than the other. They supposedly lead to the same place anyway. But as the roadmap map above shows, the “Eastern” path seems to be more direct, yet this also makes it more steep. It’s narrow and thus can only be taken by one person at a time. The “Western” path seems to be longer, but also more accessible. It lends itself to visible, rapid, step-by-step progress. It’s wider – and so many people (in theory entire nations) can take this path together. Still the final leap is a challenge that remains to be solved.

We hope to live long enough to see us making this leap together.