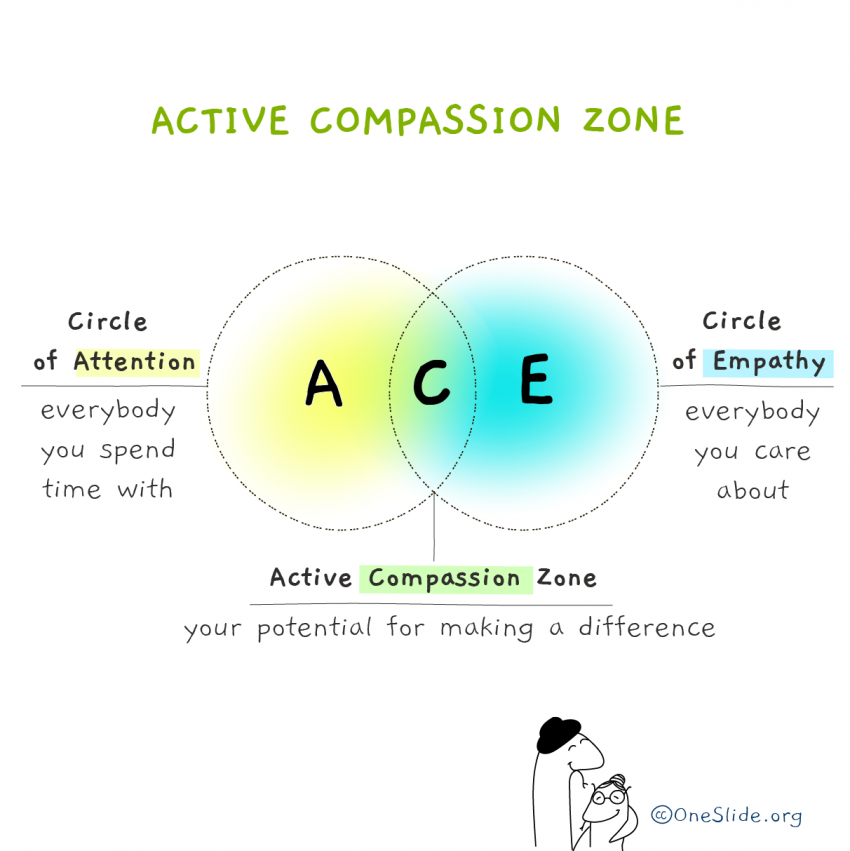 We came across the notion of the “Circle of Empathy” in Jaron Lanier’s writing.

You can get a taste of Jaron’s brilliance in “One Half a Manifesto” and this video.

Broadly speaking, the concept itself is simple: there are things (and people) you care about, and things that you don’t care about. Circle size is arbitrary. The border is blurry.

A lot of what we think, feel and do can be explained or made sense of through this simple frame.

One aspect of the concept though caught our attention: if asked whether you care about other people you don’t know – most of us would say yes. We definitely like to think that we care about every being in the universe and wish them all the best.

Yet this caring very rarely translates into any action. We actually do (or even have potential to do) anything good or useful for very few people. The reason is – even though we care about all, we don’t really know the vast majority of them or spend time interacting with them or even thinking about them.

Our attention is (disproportionately) consumed by very few things or people. Which is probably good. If it was spread equally across the universe we would cease to exist.

So now we have two circles: Circle of Empathy and Circle of Attention. And where they intersect – what we find is a territory that we can call Active Compassion Zone. If you care for somebody and pay a lot of attention to them at the same time – this is where you have real potential to make a difference.

If we put Buddhist concepts into the framework, then reaching Nirvana can be seen as extending both your Circle of Empathy and your Circle of Attention to the infinity.

Bodhisattvas then choose to shrink their circle of Attention back to a sizeable scale and through Active Compassion start to help others.

It’s beautiful when people bring what’s in the Circle of Empathy into their Circle of Attention, and vice versa. A lot of great art is doing just that. Good human-centered design can also be seen through this framework.
Education has a long way to go. It’s over-focused on attention and doesn’t pay nearly enough attention to empathy.

Anyway, you see where we’re going with it. We will be working hard to align our own circles better in the future.