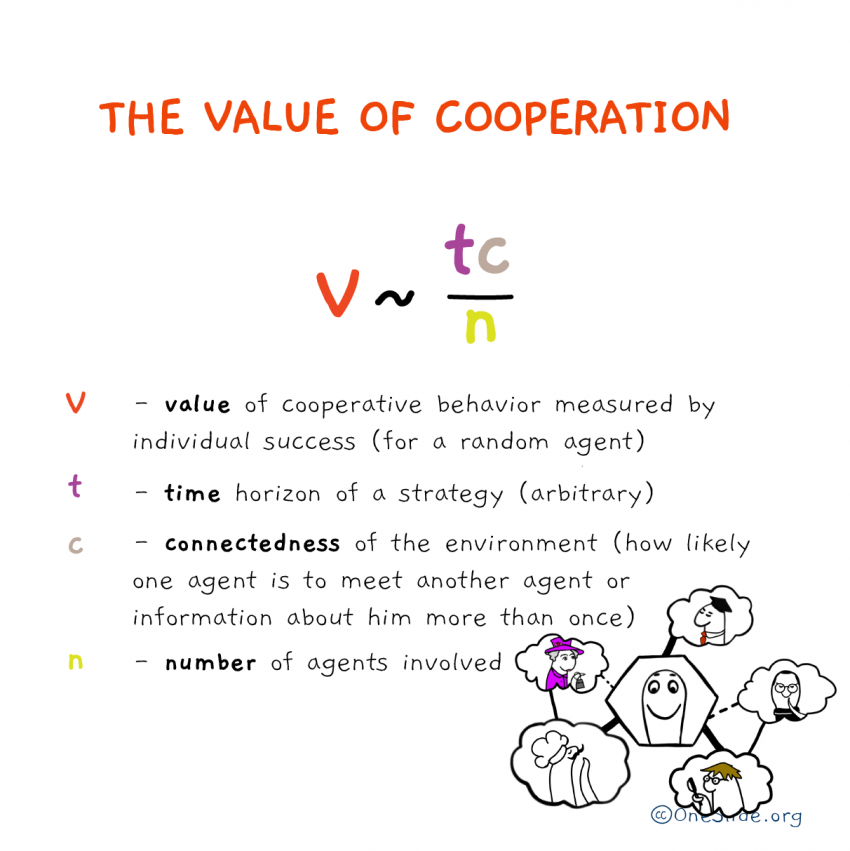 Cooperative behavior (in game theory and in life) is a choice.

If we put the moral thing aside and judge the value of cooperativebehavior by the individual success, then we can see that:

(a) it’s more valuable in the long run,

(b) the more agents are involved, the less valuable it is, and

(c) it’s more valuable in the environments where information is exchanged faster.

This is why modern age of hyper-connectivity fosters cooperation.

Disclaimer: this is not a scientific law or anything. It’s the personal observation, which might hold or not hold true depending on lots of factors. Think twice, share your thoughts with us and use it at your own risk.

Reading about game theory, iterated prisoner’s dilemma, and other interesting things as well as how they can be applied to biology and the theory of evolution could bring to a simple thought:

The more the number of players, the less valuable cooperation is. If you live in a small village, robbing somebody is not a good idea: people will know and very soon you’ll be in trouble. If you live in a huge city though, the chances that you meet the same person again (or anybody who knows him) are small, so robbing somebody might be ok: you can do it, run with the money and feel good the next day with other people, who will never know.

The more connected the environment is, the more value cooperation brings. It’s the other side of the previous point. If you live in a big city and you rob somebody, your photo is taken and then shown in the media, so that more people will know you as the robber. Then you are less likely to feel good the next day in this society. So if the environment is connected, you are more likely to meet people who are somehow aware of your previous actions and interactions, hence, cooperation works better than betrayal.

This idea of the value of cooperation for a strategy being a function of time horizon, number of agents, and connectivity (as well as other factors depending on a particular game setting) provides an interesting viewpoint to a number of things.

If the “theory” has something to it, then future looks inspiring.
Almost at any scale and in any area of human affairs today, connectivity grows faster then the number of people involved. And thus, cooperation becomes strategically more valuable over time and more people (and hopefully organizations) will go for it.